No room for neutrality in the cost of living crisis! 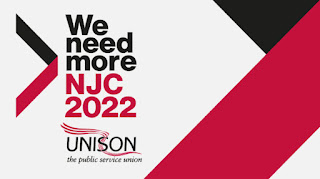 In what may be a first for this Blog, I am indebted to the North Yorkshire branch of UNISON for speedily reporting the outcome of yesterday's meeting of the National Joint Council (NJC) Committee (the indirectly elected body which oversees pay negotiations in respect of local government workers in England, Wales and Northern Ireland).

The committee had before it an offer from the employers, payable from 1 April 2022, for £1,925 on all pay points, plus an extra days leave and 4.04% on all allowances. This was in response to a pay claim for a flat rate pay increase of £2,000 or the current RPI rate, whichever was the higher.

In response to this generous offer to cut the real pay of all the members they represent, the NJC committee did not decide to request an industrial action ballot but instead to hold a consultative ballot. Rather than make a recommendation to members in the consultative ballot the committee decided, according to the North Yorkshire branch, to adopt "a neutral position”.

Having been around a while, I thought I would compare the approach of the NJC Committee in 2022 to the approach which it took 15 years ago.

The retail price index (RPI) was 4.5% higher in April 2007 than it had been in April 2006. The employers offer that year, of 2.475%, therefore fell short of price inflation by 2.025% (or a 2.025% pay cut in real terms). In response, UNISON’s NJC Committee agreed to proceed to a strike ballot, albeit this was not successful. A year later RPI inflation had fallen slightly to 4.1%. The employers offer that year, of 2.45%, fell 1.65% behind price inflation (amounting to a 1.65% pay cut in real terms). Once again, the NJC Committee agreed to call for a strike ballot. Two days of patchily supported strike action in July 2008 eventually led to a reference to arbitration and an additional 0.3% on our pay.

Since those disputes in the long ago world of a (New) Labour Government, over the past 12 years, NJC staff have lost on average 27.5%from the value of their pay when measured against the Retail Price Index (RPI) measure of inflation. The offer in respect of which the NJC committee could not even bring itself to make a recommendation not only does nothing to reverse this decline but permits the pay of local government workers to fall further behind  rising prices, at every point on the pay spine.

It is, of course, utterly disingenuous for trade union negotiators to put an offer from the employer to their members without making a recommendation. This is tantamount to recommending acceptance, without having the courage to acknowledge that that is what one is doing. If workers do not see that their leaders are prepared to lead them in a fight then they will not have confidence that such a fight can be won.

I appreciate that the lamentable turnout in last year's national ballot may have shaken the confidence of the committee to proceed to a strike ballot. However, things have changed very much since then, both in relation to the rate of inflation and in relation to the beginnings of a significant strike wave across the country. In any event, even if the committee felt that a preliminary consultative ballot was the correct course of action, there can be no excuse whatsoever for failing to make a recommendation to the membership.

As between employers and workers there is no "neutral position”.

In the light of the dereliction of duty by the NJC Committee, UNISON branches and activists in local government in England, Wales and Northern Ireland must use their rights in accordance with rule B.2.5 to campaign, vigorously, for rejection of the employers offer of a real terms pay cut (if someone tells you that you are not permitted to campaign, ignore them. If someone threatens you with disciplinary action ignore them even more. This was my approach over many years and I never found it did any harm).

It may not be possible to secure rejection of the employers offer in the absence of leadership from the NJC Committee, but that is no excuse for not trying.

The most active and committed minority of UNISON members, who are most likely to vote in internal trade union elections, will be motivated to support those whom they see sticking up for them in this cost of living crisis.

On the other hand, if members see no resistance from within UNISON to a further real terms pay cut, then the forces of apathy and despondency, who seek a restoration of the Ancien Régime, will have the advantage in the coming year.

In the meantime, all UNISON members can support our Scottish local government comrades who have voted to take strike action and our members in higher education who are being balloted for strike action.