Remembering the Battle of the Lewes Road 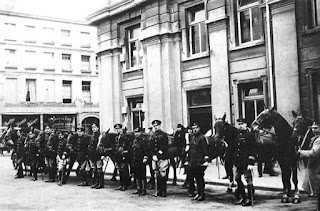 Ninety four years ago tomorrow, on 11 May 1926, a mounted force of volunteer special constables (such as those pictured at the time outside the Town Hall) attacked a peaceful crowd of working people outside what was then Brighton’s Tram Depot (now Lewes Road Bus Garage) in one of the most notorious acts of police brutality during the General Strike (when – for nine short days – our movement stood together to defend the miners from proposals for pay cuts and increased working hours).

Brighton a hundred years ago was not a centre of manufacturing industry and, when the call came (on 2 May) from the General Council of the Trades Union Congress to call out the first wave of strikers (from 4 May) it was only addressed to about 6,000 workers in Brighton and Hove (about 17% of the total workforce at the time).

The biggest impact upon Brighton came from the action of the rail, tram and bus workers who brought public transport to an immediate halt. The middle class volunteers of the “Organisation for the Maintenance of Supplies” (who had been established as part of the Government’s plans for the strike to keep services going – and included local fascists) lacked the skills and experience easily to replace these vital workers.

A week into the strike a rumour that volunteers strikebreakers (or scabs to use the correct technical term) were going to try to take trams out of the depot brought crowds out into the Lewes Road, at about the time that local primary school children were being brought to their homes for lunch. What followed was christened, by the local paper, “the Battle of the Lewes Road.”

The crowd was peaceably preventing the possibility of any trams being taken out when the mounted police drew their batons and charged into the crowd, putting men, women and children to flight. The mounted special constables clearly had the best of the subsequent fighting (although at least one of their number was injured) and – police being police – they arrested 22 of their adversaries who were marched in handcuffs to the police station.

On the subsequent day, sadly also the day on which the TUC General Council called off the General Strike, abandoning the Miners’ Federation to fight on until defeat that December, those who had been arrested were hauled up before the local Magistrates, under the chairmanship of the then Mayor of Brighton (a noted opponent of the strike). Though defended by a local lawyer – the Labour Councillor for Lewes Road ward – all were found guilty and were sentenced to between one and six months hard labour.

The capitulation by the General Council meant that there were other victims of the strike on our side – as some local employers (including, in respect of the tram workers, the local authority) refused immediately to allow all strikers to return to work. The tragedy of this betrayal is underlined by the fact that support for the General Strike in Brighton and Hove had been so solid. No tram left the tram depot on 11 May, nor on any day during the strike.

I have been remembering these events as I read through the notes prepared by my sister, Mim Rogers, before her untimely death in 1985. Mim was planning to write her undergraduate dissertation about the General Strike in Brighton (and in particular about the Battle of the Lewes Road) and had gathered a fair bit of material. Now that I am retired, I have set myself the task of pulling that work together in preparation for the centenary of the strike in six years time (which I hope and expect to see!)

The General Strike of 1926 revealed the fear and hatred which the wealthy have for the workers upon whose labour they depend, and the weakness and cowardice of the leadership of the movement which workers have created to defend ourselves from the consequences of that fear and hatred.

The Battle of the Lewes Road was an important – and revealing – moment in that historic event, and one which our movement in Brighton and Hove should be sure to remember, particularly as we approach the centenary.
Posted by Jon Rogers at 8:38 pm