Although incumbent UNISON General Secretary, Dave Prentis, must be disappointed at the significant reduction in nominations he has secured compared to previous elections, his campaign team were whistling to keep their spirits up on Tuesday, posting the following text to their campaign website;

“The nomination period closed last Friday (9th October) and we’re now waiting for the returning officer to complete their examination of nominations made. After that is a period of time to allow for appeals.
The election itself will start 9 November.
In the meantime, if you’ve nominated Dave (and thanks to the 200 plus branches and other nominating bodies that did!) you are allowed to notify your members that you did so and why you did so through normal branch communication channels. However, under the procedures, you must not use official UNISON resources to campaign for members to vote for Dave.  Further information to follow.”

When I read this I was struck by the very liberal interpretation of our election procedures being adopted on behalf of a candidate who is already our General Secretary. In past elections it has been permissible to inform members of a branch nomination but not to go into the reasons for the nomination – as that would amount to using UNISON resources to campaign for that candidate.

As a mere Branch Secretary of our Union one of my duties is to ensure compliance with the Union’s Rules so, having spotted what I thought was a change of approach, I sought guidance from the Returning Officer as follows;

“I am writing, as a UNISON Branch Secretary, to seek guidance on the correct interpretation of paragraph 51(a) of the procedure for the General Secretary election, having become aware of a liberal interpretation of the provisions of that paragraph which has been published by one of the candidates (who is the incumbent General Secretary).
Paragraph 51 of the procedure provides inter alia that UNISON “funds, property or resources cannot be used to support campaigning for any particular candidate, except in the following circumstances.
a If a nominating body wants to tell their members about the nominations through their established methods of communication (for example, branch newsletters and social media resources)”
This has commonly been interpreted as meaning that (for example) a UNISON branch can inform its members of the fact of the nomination which it has been made without calling openly for a vote for that candidate.
However one of the candidates in the current election (the incumbent) has published online the following interpretation “if you’ve nominated Dave you are allowed to notify your members that you did so and why you did so through normal branch communication channels”( http://www.votedaveprentis.org.uk/nomination-news-and-next-steps-in-the-campaign/). I have added the emphasis to the words which make this a liberal interpretation of paragraph 51(a).
I am writing both to the Returning Officer and to the Union in the hope of some urgent guidance.
Can you please confirm that it is in order for branches to notify their members both of the fact of the nomination which they have made and of their reasons for having made that nomination and that this will comply with paragraph 51(a).
In the absence of any other guidance, and taking into account that the candidate who published the liberal interpretation of paragraph 51(a) of the procedure is also the principal officer of the Union, I shall be guided by this liberal interpretation.”

I received a prompt and clear response from the Returning Officer as follows;

“I acknowledge receipt of your email dated 16th October.
It is the view of the Returning Officer that the wording of Regulation 51a allows UNISON resources to be used to inform members of the identity of the candidate nominated only and cannot be interpreted as allowing the communication of additional information as appears to be the case in the posting you refer to (i.e. “and why you did so”)
I trust this clarifies matters.”

I am pleased to have had such clarification (which happens to reflect the approach of the campaign of the candidate I support – the serious rank and file challenger John Burgess).

It is worrying that the Prentis camp have not been as careful and have misinformed their own supporters in a way which could call the result of the election into question if Dave were to win. I hope they will correct the blog post and issue an apology – but will post a screen shot of the page for posterity. 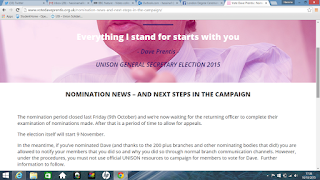 Do we want to re-elect a General Secretary who is so unwilling to engage in detail that he can't be bothered with the detail of the election procedure for his own job?

The Returning officer has issued revised guidance, which I will cover in a further post.
Posted by Jon Rogers at 5:55 pm