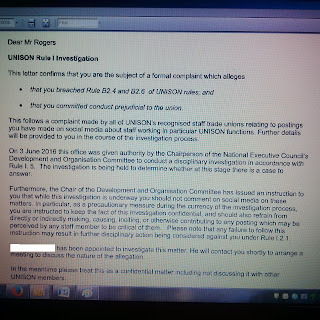 This is a letter which I have received, dated 3 June 2016 from a UNISON employee (whose identity I have redacted) informing me that another UNISON employee (whose identity I have redacted) has been tasked with conducting a disciplinary investigation into allegations that I have breached UNISON Rules and brought the Union into disrepute by comments I have made on social media "about staff working in particular UNISON functions."

You will see that the letter reports that an NEC (National Executive Council) Committee Chair has issued an instruction to me to keep this matter to myself. However I have not in fact heard from that NEC Committee Chair and am unaware in any case of any UNISON Rule which empowers the Chairs of NEC Committees to issue instructions to individual UNISON members in such a way. Therefore I do not consider that I have been properly or appropriately instructed, by anyone with legitimate authority to issue such an instruction, to keep the fact of this investigation confidential.

Interestingly (or not), this notification of a disciplinary investigation comes a fortnight after the Union was notified of my having complained to the Certification Officer about the General Secretary election (and just one day after I publicised the fact that I had done so on this blog).

You might think that this looks like retaliation but I (if I were to do as I have reportedly and purportedly been "instructed") could not possibly comment.

Although I suppose I may comment further (avoiding of course directly or indirectly making, causing, inciting or otherwise contributing to any posting which may be perceived by any staff member to be critical of them) (as far as that is reasonable).