Journalists have noticed that the much-discussed public sector exit payment cap is not yet in force. It has certainly been a long time coming, but perhaps the journalists haven’t been paying attention over the past five years.

The Tories promised this change in 2015 (when they introduced enabling primary legislation in the Small Business, Enterprise and Employment Act 2015.)

This led to consultation on  draft Regulations in 2016 – and to a flurry of exits by those who were trying to avert the impending cap. I blogged at the time about how, in local government at least, the cap could hit those who were very far from being “fat cats.”

The application of the exit payment cap to long serving members of the Local Government Pension Scheme would deny (for example) social workers made redundant above the age of 55 access to an unreduced pension (which has been promised to those workers, in those circumstances for many years).

When Theresa May’s “strong and stable” Government called a General Election in 2017 they scuppered their own plan as far as the exit payment cap was concerned.

An attention-seeking Tory backbencher then introduced a Private Member’s Bill to purse the same agenda, but that also got nowhere.

When it found time again, the Government consulted afresh on new legislative proposals between April and July of last year. The response to consultation has been awaited now for almost eight months.

In response to this week’s coverage in The Times the Government have apparently now confirmed that they will be responding to the consultation soon. We can anticipate that they won’t have listened to sensible arguments against what they want to do.

UNISON’s 2019 Local Government Conference agreed to renew opposition to this attack upon our members – and our local government employers, the Local Government Association spelt out the damaging implications of the Government proposals in their response to consulation.

Writing as someone whose recent redundancy would have been so much more harmful if the exit payment cap (as proposed) had been in force, I hope that our trade unions will continue to expose and oppose this pernicious attack upon public servants.
Posted by Jon Rogers at 11:00 am No comments:

The Tories’ latest plans to attack trade unions illustrate quite well their lack of understanding of workplace realities and of the history of employee relations in this country. These plans don’t pose much of an immediate material threat to our movement, but they highlight the ideological hostility to collectivism which drives the Government – and which will drive them to further attacks when this one turns out to be something of a damp squib.

Their cunning plan is to extend the right to be accompanied, under section 10 of the Employment Relations Act 1999, so that instead of being restricted to work colleagues and trade union representatives, there will be some other category of qualified or experienced representatives to whom workers can turn.

This wheeze has excited Tory supporters, who think it is “fairer” to eliminate the unions’ “monopoly” of the right to accompany workers at hearings. It would create new opportunities for non-union organisations offering individual representation (for those who don’t want to be bothered with collective bargaining, solidarity or industrial action) – such as Edapt in the schools sector.

Our Government’s ignorance of our history would be amusing if it weren’t for the fact that they are, well, our Government. The statutory right to be accompanied (by a work colleague or trade union representative) at a workplace disciplinary or grievance hearing was introduced only just over twenty years ago, alongside the statutory process to seek union recognition, during Blair’s first term.

Before that workers had no statutory right to be accompanied (by anyone) at a disciplinary hearing at work. Trade unions had fought for and established this right through collective bargaining outside the law. Following the introduction of the right to claim unfair dismissal in the 1970s, case law – and the concomitant growth of the personnel function throughout industry – permitting workers to be represented at hearings had become commonplace but – until 1999 – it was not on a statutory footing.

The then Conservative opposition had opposed Labour’s Employment Relations Act in 1999 because, they said, it would “jeopardise employment, endanger the successful legacy of good industrial relations left by the last Government, impose further damaging costs on British business and risk industrial strikes and disruption, rather than leaving employers and employees free to settle relationships for themselves without outside interference.” John Redwood said; “I am all for people belonging to trade unions if they wish, but I am not in favour of forcing them to become members, or making them use the trade union to represent them when they wish to represent themselves. Some people prefer to negotiate for themselves, and some people make a good job of negotiating for themselves.”

The Conservative opposition, in 1999, did not argue that workers should have other options for representation – they argued against enshrining in law the right to union representation in order to defend a status quo in which there was no (statutory) right to representation at all. This was – and is – consistent with the argument always advanced by employers who resist union involvement in the workplace – that they do not want an “external third party” involved in their relationship with their workforce.

The introduction of the statutory right to be accompanied, with its restriction to work colleagues or trade union representatives, created some additional work for the Certification Officer, the Government official who has the job of maintaining a register of trade unions. From time to time “trade unions” would arise which weren’t really collective bodies negotiating terms and conditions of employment but which had been set up to try to offer individual representation (presumably in order to make money). The Certification Officer refused to list these as trade unions.

Here is one such example.

Here is yet another.

In the third of those links you can read the Certification Officer’s comments to one of the would-be founders of a “trade union” which wasn’t. “Section 10 (of the Employment Relations Act 1999) was not enacted so as to allow workers to be represented at internal disciplinary or grievance hearings by solicitors or consultants; such outside representation being opposed by most employers and employers’ associations.”

This, therefore, is the point at which the history lesson comes up to date – and the Government’s ignorance of workplace reality is made very clear. Sensible employers would prefer that worker representation was provided by organisations with which the employer has some ongoing relationship, rather than by “no win no fee” solicitors or any other organisation which is focused only on the individual. Anti-union employers might prefer a tame staff association. No employer wants a free-for-all for workplace representation.

Of course, a Government which is looking to crash out of the European Union without regulatory alignment is obviously not simply reflecting the views (or interests) of large employers (it’s called “relative autonomy” for any students of political economy). The opening up of individual workplace representation to new organisations is clearly being driven ideologically. It’s probably the sort of thing we can expect from “assorted weirdos”.

The plan to let private consultants try to make money from individual representation in the workplace may be intended as an attack upon trade unions, but it is really an attack upon good employee relations and a "spiv's charter."

It is fairly obvious that the option of “alternative representation” won’t pose much of a direct threat to trade union membership in the long run. If there was a lot of money to be made out non-trade union individual representation of working-class people it would have happened by now. At most there could be a marginal impact on union membership among higher-paid professional workers who could afford to pay the sort of subscriptions to a “non-union” from which a profit might be made.

This particular cunning plan is no more than a straw in the wind, but it is a chill wind which threatens ever further restrictions on the right to strike. We need to defend the principles of collectivism from every attack, even the daft ones.
Posted by Jon Rogers at 5:21 pm No comments:

I received a leaflet today promoting the candidacy of Kier Starmer to be Labour’s next Leader. It’s a good quality piece of campaign literature (although I wasn’t persuaded and will be voting for Rebecca Long-Bailey, who was nominated by our local Labour Party).

However, I was slightly unnerved by the fact that the leaflet opens out into a large portrait of the candidate, bearing the slogan “Integrity, Authority, Unity”. 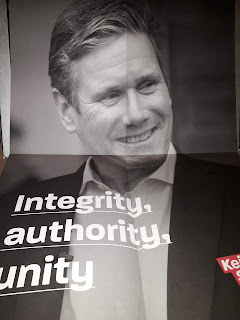 As someone who found in Jeremy Corbyn, the first Labour Leader I had supported (as a leadership candidate) since the decision on who our Leader should be was taken away from the Parliamentary Labour Party I was always conscious that the criticism that some “Corbynistas” were tending towards a personality cult was not without its force.

I don’t think Jeremy Corbyn ever authorised anything quite as gruesome as this poster however. This is real personality cult stuff, using half of the two sides of A3 available on the leaflet for what looks like a cross between a window poster and the sort of thing that might appear on the bedroom wall of a particularly disturbed teenager.

But what is the slogan trying to say about the candidate, in an election against two other candidates?

He is the candidate with integrity? The integrity he showed when he joined the mass resignation from the Shadow Cabinet in 2016 (before being invited back as Shadow Brexit Secretary)? Are we meant to conclude that he has more integrity than the other candidates? On what basis?

He is the candidate with authority? Please. This is a blatant appeal to the unconscious bias which sees in a white man in a suit the characteristics it expects to see in an “electable” leader.  Should we conclude that Mr (“Sir”) Starmer has more authority than his female opponents? If he has, why has he?

He is the candidate to bring unity? The sort of unity he encouraged by nominating Owen Smith for the leadership in 2016? That was the unity of majority of the Parliamentary Labour Party against the majority of the Party membership.

Let’s be clear. What I am criticising here is a leaflet, not a candidate. The bookie’s favourite to be our next Leader may win the election, and if he does, I will campaign for him to be our Prime Minister (just as I campaigned for successive Labour Leaders whom I had not supported in their election within the Party).

Ultimately, the identity of the Leader of the Labour Party is less important than the active willingness of the Party membership to assert our democratic right to control the direction of our Party.

However a Leader who genuinely wanted unity with the membership, who wanted authority founded upon democratic engagement with that membership and who sought integrity in that relationship of mutual respect would be more likely to assist us, as Party members, in building the Party our people need.

That’s why I will vote for Rebecca Long-Bailey.