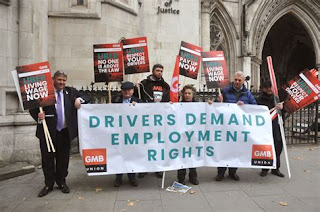 Today’s Supreme Court decision that Uber drivers are “workers” - with some (but not all) of the legal rights of employees - and not self-employed contractors is not just a victory with which the GMB can be justly pleased, it is a decisive victory, at the highest court in the land, for many working in the “gig economy” - and it is, in particular, an important defeat for a global tech giant.

Reliance upon legal protections is no substitute for organised industrial strength, but that doesn’t mean that our movement should pay no attention to the law. Indeed, the workers of the mid-nineteenth century who fought to limit working time realised that making demands of the capitalist state is part of the struggle against capitalism.

More than a hundred years later, Governments conceded individual statutory rights to employees in response to the strength of our movement in the workplace. Employers have sought to circumvent these rights by creating new models of precarious employment which deny these legal protections to their workers.

The challenge which the GMB now faces is to unionise tens of thousands of Uber drivers in order to help them to enforce their newly confirmed legal rights.

Posted by Jon Rogers at 2:09 pm No comments:

Time for the debate about electoral reform?

Brighton Pavilion Constituency Labour Party (CLP) has become the latest CLP to back a model motion from Labour for a New Democracy, following a meeting of our General Committee (GC) on Thursday which had been preceded by an informal meeting, open to members, addressed by Clive Lewis, MP.

It was the discussion with Clive which swung me myself from abstention to voting in favour (as the motion was passed nemine contradicente with one abstention).

I have never been particularly taken with electoral reform as a political objective, perhaps because I don’t think it matters too much whether “votes have equal weight” or parties are represented in Parliament in proportion to their support from the electorate. I can't bring myself to care about such inconsequential things when capitalism is destroying the planet and humanity.

However, given the impossibility of Labour regaining any significant number of seats in Scotland whilst Scottish politics is dominated by the national question - so that a Labour majority at the next General Election would require a swing, in England and Wales, exceeding any we have ever achieved - and bearing in mind that FPTP has benefitted the Tories far more than it has benefitted the left for decades - there is a strong argument for a “one off” electoral deal with other parties to deliver meaningful electoral reform. This would create new challenges for the future, but they don't appear any more challenging than those we face at the moment.

This is not an argument for a “progressive alliance” (the case for which always begs the question of whether the Liberal Democrats who governed for the first five years of our current bout of austerity can be counted among the “progressives”), nor does it address comprehensively the constitutional changes required in this country (such as replacing the House of Lords with an elected second chamber, abolishing the monarchy and the Corporation of the City of London and properly empowering local communities - never mind “expropriating the expropriators”).

However, we cannot ignore the case for electoral reform indefinitely. None of the new democratic institutions created by Labour this century use FPTP for their elections and, whilst the voting system for the Westminster Parliament is far from being the most important question confronting the working class (that would be how to rebuild our labour movement) it is a question which we must now ask, and to which we must find an answer.

Posted by Jon Rogers at 5:57 pm No comments:

Five and a half years ago I was blogging here about how the (then proposed) exit payment cap would hit local government workers a long way away from the “fat cats” of Daily Mail legend.

So I was very pleased to hear that, just three months after (finally) imposing the cap, the Government has been forced to back down, citing (unspecified) “unintended consequences”.

This is a very good outcome for public servants and a marvellous testament to the sheer stupidity and incompetence of the gaggle of reactionaries purportedly running this country.

If only other stupid Tory policies could so easily be undone!

Posted by Jon Rogers at 4:28 pm No comments: