Lambeth's shame - and its misreporting

For anyone associated with Lambeth Council (by whom I was employed for 33 years from 1987 onwards) yesterday’s publication of the report of the Independent Inquiry into Child Sexual Abuse is a significant moment. The report sets out a litany of the most appalling abuse of children in the care of Lambeth Council, going back over many decades.

The Council has apologised and established a redress scheme to provide compensation - but nothing can undo what was done to so many vulnerable children for whom the borough was responsible over such a long period of time. There can be little doubt that yesterday’s report would never have seen the light of day had it not been for the determination of survivors of abuse (such as those organised in the Shirley Oaks Survivors Association - who withdrew cooperation from IICSA because of their limited methodology).

The report should be read (and re-read) in order to understand the testimony heard by the report authors and also to consider their analysis. It is evident that there was a systemic failure to protect children, and to listen to their complaints, which goes back before the formation of Lambeth Council in 1965 and continued - in at least one case to which the report refers - until 2016.

Unfortunately, for some commentators, any report about Lambeth is simply an excuse to bash what is remembered as having been a left-wing Council in the 1980s and early 1990s. Some commentary is poorly informed, some is worse.

Perhaps the report authors - not being local government finance experts can be excused for having said that “the desire to take on the government and to avoid setting a council tax rate resulted in 33 councillors being removed from their positions in 1986.” However seeing this error repeated verbatim by the journal Public Finance (published by the Chartered Institute of Public Finance and Accountancy - CIPFA) - who allow an ill-informed subeditor to introduce their article with the misleading statement that “the failure of the London Borough of Lambeth to set a council tax rate during the 1980s directly contributed to sexual abuse in its children's homes” - is alarming.

Council Tax was not introduced until 1993 (a simple fact of which you would think a journal produced by CIPFA would be aware). The tax which the Knight administration in Lambeth delayed setting (not failed to set) was the old domestic rates (which were themselves abolished to make way for the poll tax - or “community charge” - the predecessor to Council Tax).

The Public Finance subeditor also takes what the report says much further than the authors of the report, who plainly see the political contention around the conflict with Central Government, leading up to the delay in rate-setting in 1986 and thence to the surcharge and disqualification of councillors, as part of the context of the culture of the organisation which helps to explain its failure to address the crisis of child sexual abuse - a long way from making the absurd claim that the delay in setting a rate in 1986 “directly contributed” to sexual abuse which had been going on in Lambeth children’s homes since before Lambeth Council was created in 1965.

If an informed and respected source of local government news can get things so badly wrong it is of course no surprise that the MailOnline website prioritises attacking left wing Council leaders of the 80s and early 90s, giving their details a higher profile than those of the convicted sex offenders who were actually abusing children in Lambeth.

Since the report has only been public for a little over 24 hours at the time of writing it is easy to see that this sort of gutter journalism is simply rehashing prejudice rather than paying serious attention to the content of an important document. It is a massive oversimplification to pick out one contextual factor and attribute the horror of Lambeth’s children’s homes to that one cause. Shirley Oaks - the home which has become a byword for abuse - was closed in 1983 (three years before the confrontation between Lambeth Council and the Tory Government).

The report is genuinely horrifying and deserves to be taken seriously. It should not be used to make ill-informed attempts to refight political battles from a generation ago.

A lot more than fifty five years of hurt... 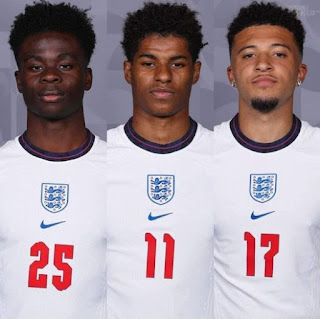 I have been blogging here for fifteen years now and (without checking back) I think I can fairly safely say that I have never blogged anything that was - even tangentially - about football.

I don’t really follow football, any more than I follow any other organised sport (I feel about organised sport slightly less aversion than I feel for organised religion). However, towards the end of each Premiership season these days I do anxiously check results to see that Brighton and Hove Albion are not going to be relegated - and when there is a major international tournament I get caught up in it, like many people, as we do by the Olympic Games (for example).

So it was that yesterday I watched the Euros final with family (including my brother and nephew who are both proper football fans and could comment knowledgeably about tactics, such as when we should have brought on substitutes and who should have been asked to take penalties) - and so it was that I cheered England’s goals and shared England’s disappointments with millions.

I had been impressed with Gareth Southgate, as a manager and leader, and by much about England’s team, including their “taking the knee” and the activities of individuals such as Marcus Rashford, but that was - on the night - all rather secondary to the excitement of the match and, of course, the disappointment at the outcome of the penalty shoot-out.

I don’t have nearly enough football-related knowledge to comment on the tactics employed by individual penalty-takers, or on the decisions as to who should have taken penalties. As an only very occasional watcher of football, the penalty shoot-out seems as fair (and as unfair) as having to decide who was to be chair of our Labour Party branch by drawing names from a hat because the vote was tied.

One thing I think I can be fairly certain about is that a factor which had nothing to do with whether any particular England player scored their penalty was the colour of that player’s skin.

Yet online - and in the real world - this irrelevant factor has been the occasion and excuse for racists to reveal their racism, which I am afraid is always skulking around wherever the cross of St George is displayed, ready to emerge when it has the opportunity (as it did when people who were supposedly England “fans” booed their own team for making a modest expression of opposition to racism, having been egged on by the opposition to that gesture of leading Tory politicians).

Racism runs deep in this country, a fact which many white people (including many on the left) don’t like to acknowledge - but just as the 2016 Referendum vote was the occasion for a major increase in racist hate crimes (as racists felt emboldened and empowered) so it would appear that a significant number of England “fans” have expressed their disappointment at defeat by Italy through the prism of racist hatred of Black players - and Black people generally.

There is, however, the possibility and - as we can see today - the necessity for being anti-racist. “Being anti-racist” cannot, however, be some sort of existential state in which an anti-racist individual observes the world around and regrets it - in this case “being” depends upon “doing” and therefore what is needed is anti-racist action.

In the immediate moment this may mean expressing solidarity with individual footballers, and it will include marching, protesting and petitioning - but for trade unionists it will also include working harder to understand and uproot institutional racism in the workplace (and our movement) and for Labour Party members it will include finding ways to ensure that the Party clearly and consistently confronts racism and never accommodates to it.

On reflection, after fifteen years of blogging here, it probably remains true that I have never actually blogged about football.