If you knew your history... 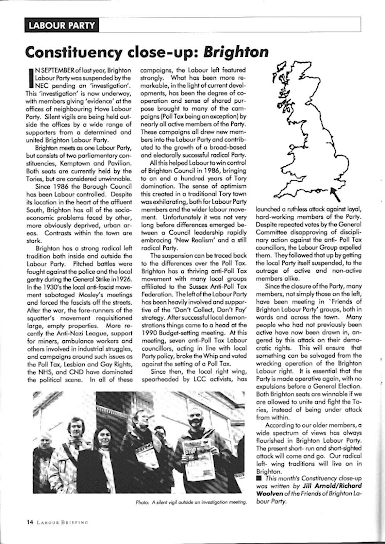 More than 31 years ago, in March 1991, Labour Briefing carried the report above about goings-on in what was then the single Brighton Constituency Labour Party, which had been suspended six months beforehand..

There is nothing new about the Labour Party seeking to close down its own democratic structures in order to isolate or eliminate the influence of socialist ideas.

Socialism is, however, unavoidably part of the Labour Party for as long as the Labour Party is the party of the organised working class. Furthermore, other routes to socialism through other political parties are at best pointless diversions.

That's why socialists in Brighton did not abandon their commitment to the Labour Party in the early 1990s but continued to fight for socialist politics and the election of Labour candidates locally and nationally.

Socialists in Brighton and elsewhere must continue to orient ourselves towards the Labour Party and the trade unions as well as other progressive single issue campaigns.

These differences by race and gender probably reflect the distribution by gender and ethnicity of the workforce between more and less unionised sectors. The proportions of employees who belong to a trade union were highest in the Education sector at 49.4%. Followed by Human health and social work activities (39.2%), public administration and defence (38.6%) and transportation and storage (36.6%) all being significantly higher than membership density across all employees (23.1%).

That the likelihood of an employee being a trade union member increases with age accords with the data showing that employees who have longer lengths of service with an employer are more likely to be a member of a trade union. 24.9% of employees who were trade union members in 2021 had between 10 and 20 years of service, while those with tenure of 20 years or more accounted for 22.5% of total employee union membership. These are significantly higher than the percentages comprised of those with less than 1 year and between 1 and 2 years of service tenure at 7.4% and 6.4%, respectively (Table 3.1).

Trade union density varies considerably across the nations and regions of the United Kingdom. Wales had the highest proportions of employees that were trade union members at 35.6%, followed by Merseyside (32.6%), Northern Ireland (31.4%) and South Yorkshire (31.3%). Inner London had the lowest proportion of workers affiliated to a trade union at just 14.7%, with the South East (17.4%) and Outer London (19.9%) not far behind.

These figures are similar to what we have seen over recent years. Our trade union movement is ageing and, if not shrinking, then certainly not growing in a healthy way. The same challenges we have faced for the past few decades continue to confront us.

Posted by Jon Rogers at 1:18 pm No comments: 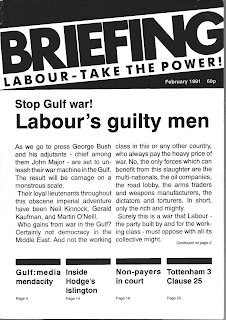 I am indebted to Mike Phipps and Labourhub for publishing my memories of involvement with Labour Briefing, alongside those of other comrades more centrally involved in the project over 40 years.

The occasion for our trip down memory lane was the news that the Labour Representation Committee (LRC) will no longer regularly be producing the magazine of which it took control 10 years ago. This would seem to be but one manifestation of a journey to the political margins which I only hope that LRC members will be able to reverse.

I won't repeat here what you can read elsewhere. However, in remembering the past of Labour Briefing I had cause to review past issues of the journal. Whilst the Labour Left is now (still) in a stronger position than at any time (before 2015) since the early 1980s (in spite of the best efforts of the witch hunters), looking back at Briefing in the late 80s and early 90s (at a time of equally vigorous witch hunting) it is obvious that we are not more advanced politically.

Our anti-imperialism was more clear-cut than it is now. Our support for equality was for collective struggles around liberation politics, not bogged down in a zero-sum game of identity politics. Our orientation to the Labour Party was principled and was also maintained by comrades who might themselves have been excluded or expelled, but who never thought that the struggle was primarily about themselves as individuals.

Somehow we managed to practice these politics retaining a sense of humour and being able to disagree whilst respecting each other's positions. No doubt the degeneration of the politics of the left reflects retreats and defeats in the material class struggle, from which the unexpected election of Jeremy Corbyn to the leadership in 2015 could provide no more than a brief respite.

However, if socialists in the Labour Party are to make ourselves useful to future struggles we will need to recapture something of the spirit of Labour Briefing in the 1980s and 1990s and apply it afresh to meet the challenges of the 2020s and 2030s.

Posted by Jon Rogers at 4:03 pm No comments:

How can Labour win? 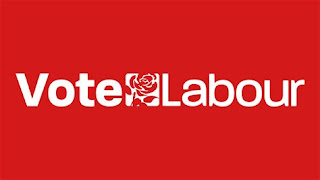 Today I have completed a course of palliative radiotherapy on the secondary tumour in my upper right arm. I hope not only that this will reduce the pain I have been experiencing, but also that comrades will accept this as a good reason not to have been out and about campaigning in the run-up to today's local elections.

We do not, of course, have elections in Brighton and Hove today, although there is a by-election over in Rottingdean. Labour has an excellent local candidate with a firm base on which to build from the last local elections three years ago.

In those elections the headline news in Rottingdean was the triumph of an independent candidate who topped the poll and seemed to take votes exclusively from the Tories. However, Labour increased our share of the vote with a swing from the Tories of over 10%.

This time, with only one seat up for grabs in the ward right wing voters will not be able to split their votes between the Tories and the independent and will have to choose one or the other. This is the basis on which it is possible to hope that a good campaign in support of a good local candidate could deliver a truly phenomenal result for Labour.

If you had told me, more than 40 years ago when I joined the Labour party in Brighton that I might ever even speculate about a Labour Councillor in Rottingdean, I would've thought that you were mad.

If that possibility is still perhaps a little remote, then I have to say that the very real likelihood of a Labour Council in Worthing is something that would have seemed equally absurd back in the 1980s.

Whilst there is no doubt the demographic changes arising from people moving out of Brighton and Hove and along the coast in each direction underpin Labour’s improved electoral performance elsewhere on the Sussex coast, there is a more immediate factor at work in accounting for the amazing change in Worthing, where we elected the first Labour Councillor since the 1970s only in 2017.

This was explained to my local party branch by a speaker from Worthing at a recent meeting. The party membership locally grew massively in both 2015 and 2016, around the two leadership elections, as local people joined the party to support Jeremy Corbyn in the elections. This gave the Labour Party the campaign resources to maximise the benefit of the increasingly favourable terrain within which they were campaigning.

Whereas, in Brighton and Hove, the emerging ascendancy of the left witnessed a vile backlash, culminating, though not ending, in the unjustified suspension of the City Party following untruthful allegations in 2016, in Worthing it seems that established party members were able to welcome new and returning members and have subsequently campaigned in a united and comradely fashion, increasing our representation on the council year-on-year until we are now on the brink of unprecedented success.

Whilst the different electoral fortunes of our Party in Brighton and Hove, when compared with Worthing, are best explained by the very different context (specifically the presence and rise of the Green Party, who are adept at appealing to voters to the right as well as the left), I don't doubt that we would have been, and would now be, in a better position if we were not as divided as we plainly have been and continue to be.

The Labour Party is - and always has been - a coalition of social democrats and democratic socialists (including Marxists such as myself) and if we are to be believed when we contend that we could provide good leadership locally or nationally the least we ought to be able to do is to get along with one another. Unfortunately, this seems unlikely both locally and nationally.

Encouraged by the victory of their chosen candidate in the leadership election two years ago, and enthused (somewhat mysteriously) by the spectacle of the uninspired and uninspiring national leadership with which we are now saddled, Labour’s right-wing, using their control of the party machine, have embarked upon an attack on all socialists which shows no sign of abating.

At a local and national level unjustified disciplinary action against left-wing activists is sadly all too common and numerous socialists are regrettably giving our unfortunate leadership what they want by leaving the Labour Party and wandering off into political irrelevance.

We should be able, overall, to improve upon the good results of the 2018 local elections because the Tory government is doing so much damage to itself. This will hardly be a vote of confidence in Labour's leadership but it will still be good news for all those who want a change of Government.

For my part, I shall be looking forward to hearing good results from comrades in Worthing not just because I rejoice in any progress for socialism in Sussex but also because it seems to me that they are showing the rest of us how to get along with each other and advance the interests of our party and our class.

Update on Friday, the 6th of May

I was overly pessimistic about the outcome of the Rottingdean by-election. Labour’s excellent candidate, Robert McIntosh, increased the Labour vote compared to 2019, beating the Independent candidate who had hoped to capitalise on the 2019 result by nearly a hundred votes. The Tories took third place which must mean some red faces above blue rosettes.

This campaign was a fine example of the local party pulling together and it's a positive sign going in to next years citywide local elections, which will of course be fought on new ward boundaries.

Interestingly, the modest Green vote was down compared to 3 years ago, suggesting that next year we may hope to see a repeat of the decline in their vote which we saw last time there was a Green administration in the town hall.

Congratulations to Robert on achieving something I didn't expect to see in my lifetime! The local party across Brighton and Hove must draw the lesson that we should work together in unity and solidarity.

Posted by Jon Rogers at 3:37 pm No comments: