Regular readers of this blog (Sid and Doris Blogger) will be fed up by now with my banging on about the decision of the Assistant Certification Officer arising from complaints in the last General Secretary election. What is most often remembered about that decision is the misconduct of the former UNISON Regional Secretary for Greater London, who used a staff meeting to organising campaigning for a candidate in work time.

However, a number of other complaints were upheld, including 19 out of 20 complaints submitted by your humble blogger concerning the misuse of Facebook, Twitter or other means of electronic communication by branches or other nominating bodies, all of which overstepped the mark and amounted to the impermissible use of the Union's "funds, property or resources" to campaign for a particular candidate.

These were not the most important part of the case and – in (predictably and not unreasonably) deciding not to order a rerun of the election -  the Assistant Certification Officer concluded, at paragraph 301 of her decision, that the breaches were not widespread, were inadvertent and were unlikely to have had much impact upon voters. The only sanction which UNISON imposed upon those responsible for the breaches was that the Chair of the Development and Organisation Committee wrote to them pointing out that they had breached the Rules.

However, what would have been more serious would have been if a national official had used UNISON's national website to campaign for a particular candidate. That could not so easily be dismissed and (since UNISON was put on notice by the upholding of so many complaints arising from the last election) it could hardly be inadvertent.

I am therefore very disappointed that I have today had to write to the Returning Officer to complain about the following post on the UNISON national website - https://www.unison.org.uk/news/article/2020/09/retired-members-committee-endorses-candidate-general-secretary-election/. Here is a copy of the post downloaded today (22 September) at approximately 11.22 (which I include because I hope that the post will not remain on the website for long now that the complaint has been made); 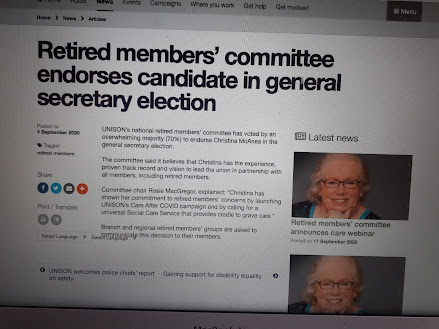 This is a clear use of UNISON "funds, property or resources" to campaign in support of one candidate in the General Secretary election (Christina McAnea) contrary to paragraph 51 of the General Secretary election procedure, by reporting and explaining the decision of the National Retired Members' Committee to "endorse" a particular candidate (Christina McAnea).

This is not a trivial breach of procedure. Retired members amount to approximately one-eighth of the electorate in the General Secretary election. This breach will cast doubt on the outcome of the election should Ms McAnea emerge as the victorious candidate and could certainly lead to complaints to the Certification Officer.

This is not like the complaints I made five years ago about branches (and other nominating bodies) who had inadvertently overstepped the mark. This is a misuse of UNISON's own national website selectively to campaign for a particular candidate in a General Secretary election.

This breach should be mitigated by the immediate removal of the post from the website and the circulation of a reminder of the provisions of paragraph 51 of the General Secretary election procedure to Branch and regional retired members' groups.

I hope that the Union will respond promptly and appropriately. You, dear reader, will be able to tell if they have by clicking on the link to the post above (or here) and seeing if it is still there…

Update at 5.37pm - the link now leads to the following;

Oops! That page can’t be found.

So there is some point in complaining - and the misuse of UNISON resources only lasted for a total of 18 days during the period when branches and other nominating bodies were deciding whom to nominate. Well done to whoever in UNISON took action to mitigate the harm that had already been done, but this misuse of resources still merits complaint.