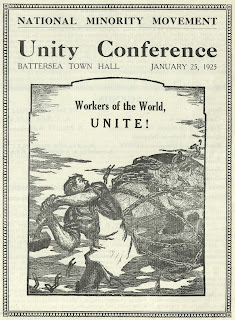 I will blog further about the content of the Returning Officer’s report into the UNISON General Secretary election in due course (regular readers of this Blog - Sid and Doris Blogger - will appreciate that my modesty makes me uncomfortable with the observation in that report that over 100 complaints which were upheld came “from one member between 24 September and 20 November 2020 identifying apparent breaches of procedures by nominating bodies in support of one candidate, Christina McAnea.”)

My purpose in blogging today is in relation to the forthcoming UNISON NEC elections, in which nominations open on 1 February 2021. These will be the third set of biennial elections in which I will not be a candidate, having served seven successive two-year terms as an NEC member in the Greater London Region from 2003 to 2017.

Throughout my time on the NEC, those of us who considered ourselves to be on the “left” (in the sense of wanting a trade union which would fight more effectively for our members’ interests) tried and - mostly - failed to create a unified organisation of the left (a sorry saga which I covered here a few months ago in anticipation of the - then - forthcoming General Secretary election). As a rule General Secretary elections - in which there could only be one candidate - would be a particular occasion for division.

However, in NEC elections, in which a certain amount of “horse-trading” has always been possible - generally - we managed to organise unified campaigns for a “slate” of candidates even in the absence of a unified organisation of the left.

The price of failure to agree is high - as we discovered in Greater London in 2005, when we lost incumbent left-wing NEC member Fiona Monkman because the Socialist Party insisted on standing Nancy Taaffe in opposition to United Left member (and then Deputy Regional Convenor) Mandy Berger for the second female seat in the Region. Taaffe came fifth out of five candidates for two seats, but none of the three left-wingers were elected.

A key ingredient in coming to agreement (when we could) was the principle that socialists did not stand against fellow socialists who were incumbent members of the NEC, regardless of whether we were members of the Labour Party, one of the small far-left parties or no party at all. After the setback of 2005, we did manage, slowly and inconsistently to increase the number of critical voices on the UNISON NEC over the years.

Times have changed of course. When the challenge from the left became so great that supporters of the status quo admitted the truth long unacknowledged, that they were themselves a faction within the union - and yet the left came within a whisker or a majority on the NEC in 2017, the lesson was learned - in the great White Elephant of the Euston Road - that what needed to be done was to do all that was possible to frustrate - and delegitimise - rank and file organisation within UNISON.

Comrades challenging for seats on the UNISON NEC today do so in a more challenging environment than that with which I was familiar - the point of electoral procedures which seek to ban groups of members coming together to support slates of candidates is plainly to empower the Union bureaucracy and disempower the rank and file.

Perhaps the lessons which I learned in the past (when the left won far fewer seats on the NEC than are now held) can safely be forgotten. Certainly, in the aftermath of the best performance by a rank and file candidate in any General Secretary election I can see the sense in capturing the momentum of that campaign to take forward into the NEC elections - and that those who chose not to be part of the campaign to elect Paul Holmes can hardly expect to be part of such an endeavour.

Her supporters may have squeaked to the narrowest General Secretary victory in UNISON’s history - but they will nevertheless be looking to capitalise upon that victory. Expect election addresses from candidates of the status quo in the UNISON elections to associate themselves with our new General Secretary.

This is probably not a time in which candidates for change in the NEC elections should be facing each other in “first past the post” elections. It’s not that those who refused to accept the decision to support Paul Holmes for General Secretary deserve - or are entitled to - automatic support just because they are current NEC members.

The point is that UNISON members crying out for change in our Union do not deserve to see socialists fighting one another for those NEC seats, when so many NEC seats are normally filled by supporters of the status quo who are elected unopposed.

Good article Jon as ever - keep going and all the best