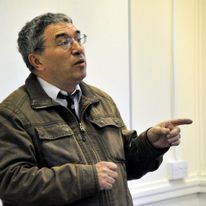 This is the speech I was proud to give at today's online rally in solidarity with UNISON President Paul Holmes, following his disgraceful dismissal by Kirklees Council;

My name is Jon Rogers. Now I am a retired UNISON member but between 1992 and 2017 I was Branch Secretary of the Lambeth branch and I served for 14 years from 2003 to 2017 on our National Executive Council.

I first really got to know Paul Holmes when Kirklees Branch led the successful campaign for a special local government conference to consider the attack upon the local government pension scheme which was made under the New Labour government in the first decade of this century.

I was pleased when Paul was elected to the NEC, adding a powerful voice to the small number of left-wingers on the NEC at that time. I was particularly pleased because Paul, like myself, was a lifelong Labour party member who saw himself very firmly on the side of the left in our movement and of the rank-and-file membership.

Labour left-wingers in the trade unions, like Paul and myself, understand that the Labour Party in this country is a vital battleground in the struggle for socialism and the interests of working people. On the one side of the struggle are those of us who continue the tradition of the trade unionists and socialists who came together more than 120 years ago to create a political vehicle to represent the interests of our members in the transformation of society.

On the other side of the struggle within the labour party are those whose priority is that they should hold office so that they may exercise power. Whilst they may, and in some cases do, believe that what they do is in the wider interest of working people, they have abandoned the goal of social transformation and seek merely to become a moderate wing of the establishment, sometimes mitigating the worst of capitalism and ameliorating somewhat the conditions of existence of the people our movement exists to represent.

These careerists and bureaucrats hate no one more than the socialists within the Labour Party who, by our very existence, gives the lie to the myth that it is not possible for the party to do more than achieve modest improvements in slow steps forward, which are forever being reversed.

There are those who will be shocked at Paul's victimisation and dismissal by a Labour led local authority. I am not shocked, and I don't imagine for one minute that Paul is. I am outraged. I am angry. I am determined to stand shoulder to shoulder with my brother trade unionist against this disgraceful conduct, but I am not surprised.

If you want to understand what is happening in the continual class struggle that daily shapes and reshapes our society, you must look below the surface appearance of events. You must ask the question "who benefits?" and you must consider the timing of events.

Paul Holmes had been serving on our NEC for more than a decade when he was suspended by both Kirklees Council and UNISON. He had been elected and re-elected as secretary of the Kirklees branch over very many years before things reached this state of affairs. What then accounts for the timing of these attacks?

What had just happened in the months before these coordinated attacks upon Paul Holmes was that he had been directly elected to represent our Yorkshire and Humberside region on the national labour link committee, ousting a key figure in the establishment of both the trade union and the labour party - someone who to this day represents UNISON on the Labour Party national executive though they hold no office on either our NEC or our labour link committee.

When complaints were allegedly made about Paul's conduct as a trade union representative, instead of simply encouraging those making the complaint to address them appropriately within the trade union, the complainant's were also encouraged - disgracefully - to take these matters up with the employer, giving the employer an opening to attack a trade unionist who had long been a thorn in their side.

My beautiful granddaughter was born less than a fortnight ago, but even she is old enough to realise that Kirklees Labour Council would not have acted in this way without some indication from within the UNISON machinery.

There are not two separate bureaucracies, one in UNISON and one in the Labour Party. There is a labour movement bureaucracy which spans both the industrial and political wings of a movement and which ruthlessly pursues its own interests, in this case, the attempted removal of a key rank and file activist.

I told you when I started that I am now a retired UNISON member, but I am still the chair of my Constituency Labour Party. Just because it does not surprise me to find a Labour authority victimising a fellow Labour Party member for being a good and diligent trade unionist, that does not mean that, as a Labour Party member, I am not angry and determined to act.

Whether or not you are a Labour Party member I urge you to protest directly to the Leader of Kirklees Council, Shabir Pandor, demanding that they rescind the dismissal of Paul Holmes, which is plainly an unfair dismissal for having undertaken trade union activities.

Contact information for the Leader will be appearing in the chat please make a note of this and please make use of it. [shabir.pandor@kirklees.gov.uk]

Brilliant speech and absolutely on-the-money in describing the organic links between the labour movement and party bureaucracies! UNISON is in danger - of becoming nothing more than a “service”, Union and of becoming a “tamed”, Union - subordinated to the shared interests of both industrial and political Labour.

But it really matters what members and activists do - and Paul is a figurehead for the changes taking place right now! Those changes threaten to take control from the bureaucracy and to place it back in the members hands; that’s when real change gathers pace! ✊️