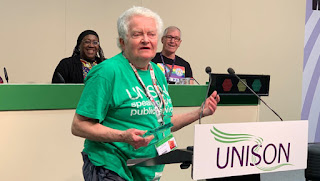 I am indebted to a recent reader of this blog for kindly reminding me of an event which took place last month at UNISON's national LGBT+ conference.

The national trade union rightly recognised Jackie’s decades of pioneering commitment to lesbian and gay (latterly LGBT+) self organisation in the labour movement and to building solidarity with the Palestinian people (it was Jackie who took the case to the Supreme Court to permit local government pension funds to refuse to invest in companies which profit from, for instance, arms sales or the Israeli occupation of the West Bank and Gaza).

However, what are those who admire Jackie's national political activity may not know just how impressive her work at branch level has been for more than 40 years. Having recently had two (rather sad) occasions to remember friends and comrades from the Lambeth branch, the award at LGBT+ conference made me think that I should also place on record my admiration for Jackie while I still can (and while she can read it).

Jackie Lewis was already a well-established NALGO activist when I arrived to work in Lambeth Council in 1987. Indeed, as I recall, Jackie was Assistant Branch Secretary of NALGO at that time. By the time I became a NALGO branch officer in the early 1990s, Jackie was Convenor of Social Services (becoming convenor of Adult Services this century).

During 25 years as Branch Secretary of the most demanding, exciting, infuriating and wonderful trade union branch I relied upon Jackie Lewis for support in very many ways. Jackie’s diligence, which borders on pedantry, makes her one of the most effective and experienced caseworkers in our movement, and one to whom I would often turn for advice.

Jackie is also an excellent negotiator. Before my time in Lambeth, she had been part of the team who had agreed what was, at the time, the best maternity package in local government. Jackie’s persistence and determination has, over many years, struck fear into the hearts of managers and won their respect (occasionally having the same effect on her Branch Secretary).

This wasn't only true locally. For most of the past 30 years, Jackie has served on the UNISON Greater London Regional Local Government Committee and its Executive, representing London on the UNISON National Social Services Committee for many years (until a manoeuvering reactionary managed to exclude her).

Jackie’s knowledge of the wider trade union, having also served for many years on the Regional Committee and attended Conferences and the TUC often benefited the Lambeth branch. Jackie can be relied upon to suggest amendments that might keep a radical motion on the right side of the Standing Orders Committee.

Most of all, Jackie Lewis is a loyal, dedicated and disciplined trade unionist. In 2004, Jackie was the only member of our branch committee to vote against a conference motion, which I proposed, calling for the resignation of Tony Blair as Prime Minister. However, when, as a branch delegate, she was asked to move the same motion against the opposition of the UNISON NEC, she not only agreed but did so brilliantly. Such understanding of collective discipline and democratic accountability is the measure of a great trade unionist.

Jackie certainly deserve the recognition which she received last month for her national activities, but I think that her service to the workers of Lambeth is the most important and admirable feature of a lifetime of unparalleled activity within our movement.

I, too, have warm recollections of Jackie Lewis’ contributions within NALGO as we as within various AGMs of the Palestine Solidarity Campaign (PSC). Within the latter, she would usually actively participate, including speaking vociferously and make articulate contributions at annual General Meetings.

A long time president of the PSC was a colleague whom I had previously known over many years as the deputy general secretary of my public services trade union, PCS. I am certain he would also have warm recollections of Jackie.