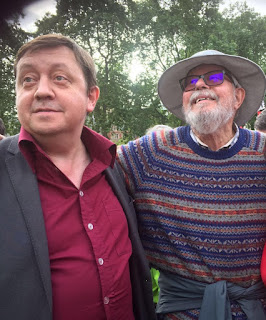 You could read this blog for years (if you were daft enough) and get very little of what you might call personal content – and now you are subject to the second such post within a month!

My father, Kenneth Ernest Robert (“Rob”) Rogers died today at the Royal Sussex County Hospital. My brilliant sister was with him as he drew his last breaths, telling him of the great love that he had from his family.

Dad was born in 1938 and spent the great majority of his working life (from the early 60s to the early 90s) in the Home Office. As a young man he had been a Methodist lay preacher, but he left God behind and as long as I have known him he has been a socialist and humanist.

Dad did not, for the most part, live his life within the narrow confines of the narrower world of political activity (with which so much of what you read on this blog is concerned) but he lived his life in accordance with political principles – he refused, for example, to carry out national service with the military and, as a conscientious objector, had to do other work instead.

In retirement, however, he stepped up his political activity, as a Labour Party member first in Hove and later in Mid-Sussex. He would often come up to London for major demonstrations (the picture here shows him with me at the protest in Parliament Square when right-wing deadbeats within the Parliamentary Labour Party tried and failed to topple Jeremy Corbyn in 2016).

The longer I live the more I realise how much I owe to my wonderful father. I am so very pleased that I was able to tell him, in the last few days, that I was proud to be his son.

Dad went into hospital from his care home (in which his poor health had compelled him to spend the last eighteen months of his life) and we are still awaiting the result of a test for coronavirus, but I am not writing this blog post to make a point about the pandemic (and the Government’s negligent mistreatment of care home residents and staff).

Nor am I writing this post to thank the staff at the Royal Sussex County for their kindness and consideration to my father in his final few days (although I do thank them, particularly for letting both myself and my sister see him – and for finding the radio which played him out).

I am writing this post to acknowledge that we all come from somewhere, we all stand on the shoulders of so many who have gone before us – and a big part of the somewhere from which I came, and a pair of shoulders upon which I have always stood, has passed from material reality into the immortality of memory.
Posted by Jon Rogers at 4:02 pm

condolences Jon to you and all of the family, it sounds like your dad continued to live a full life, guess especially at the moment it makes everyones mortality hit hone