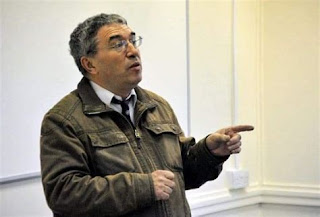 Paul Holmes is one of the most dedicated - and decent - trade unionists I have ever met. He is the long standing Branch Secretary of one of UNISON’s largest branches ( Kirklees large by virtue of a high UNISON density rather than the size of their main employer).

It’s not just me who thinks this. Paul has been repeatedly re-elected to the UNISON National Executive Council (NEC) since 2007 and won a third of the vote in last year’s election for General Secretary (the best result ever achieved by a rank and file candidate).

With Paul as a figurehead the left in UNISON won, for the first time, a majority on the NEC in the elections earlier this year - and his NEC colleagues elected him as UNISON’s President and as one of our representatives on the General Council of the Trades Union Congress (TUC).

Knowing Paul (as I am proud to say that I do, as a friend and comrade) I know that - for him - it is the more than thirty years he has served as a Branch Secretary that is most important to him, because it is through rank and file activity that an ordinary trade unionist can make a real difference.

Paul’s employer, Kirklees Council, have given him perhaps the ultimate tribute by suspending him from work in December 2019. Only now, after more than twenty months, they are beginning a disciplinary hearing against him (at a private venue in a hotel) tomorrow morning - Monday 6 September 2021.

I have no hesitation in saying that this is an act of trade union victimisation and that every UNISON member, every trade unionist - and every self-respecting member of the Labour Party (or any other Party) - should stand with Paul in opposition to his victimisation.

If you can get to Huddersfield tomorrow morning join the lobby outside the Clarion, Cedar Court Hotel, Ainsley Top, Huddersfield, HD3 3RH.

If not, joint the online rally - details on the leaflet below; 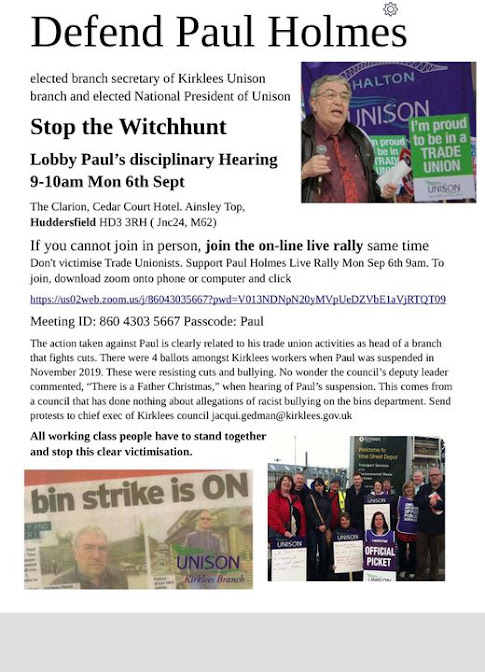