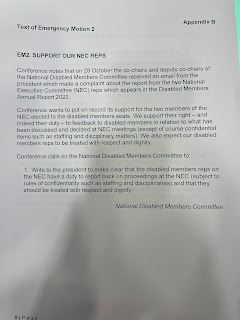 UNISON’s National Disabled Members Conference is in Brighton this weekend. As you might imagine, the large number of UNISON activists will be debating numerous motions addressing the interests of our many disabled members (among whom I suppose I should probably now count myself).

However, supporters of UNISON's Ancien Regime have predictably seized the opportunity to try to provoke something of a faction fight. One of the members of the recalcitrant minority on our NEC, and a former President of our trade union, took to Twitter to express her excitement about an emergency motion which had today been admitted to the agenda.

The background to the aptly named emergency motion "Number Two" is that the two NEC members elected to represent the interest of disabled members took the opportunity of being asked to provide content to the annual report of the National Disabled Members Committee to make a series of tendentious observations and allegations against other members of the NEC.

Having myself spent seven terms on UNISON’s NEC as part of a small minority, and being something of an inveterate troublemaker, I recognise a transparent attempt to provoke an overreaction when I read one. I myself was never able to make such criticisms in official UNISON documents, because UNISON officials censored me when I tried to breach what was considered at the time to be the "collective responsibility" of the NEC as a whole. (These days it seems paid officials of our trade union are much more supportive of those making criticisms of the elected leadership of the organisation which employs them.)

Unfortunately for the authors of the ill judged attack upon their fellow NEC members, our President was not drawn into the overreaction for which they had so obviously hoped. In fact, all she did was send an email to her two NEC colleagues complaining to them about the content of the report. Given the President’s responsibility to support and defend the integrity of NEC colleagues, her measured and responsible approach was the very least that she could have done. It certainly wasn’t any sort of unreasonable bullying (and I can say that having been on the receiving end of such bullying when I was on the NEC).

This left those who have been looking for a faction fight in the embarrassing position of having to make a mountain out of a molehill. They had been hoping, having provoked an overreaction by publishing petty and spiteful criticisms of individuals, to be able to launch a "Defend the NEC Two" campaign in order to whip up opposition to the elected leadership of UNISON in the run-up to the forthcoming NEC elections. The measured and mature approach adopted by the President frustrated their achievement of this objective.

However, although at last year's National Delegate Conference at least one motion from the National Executive Council was ruled out of order on precisely these grounds (that the NEC did not need a Conference decision to take the action called for) it would appear that in today's UNISON, Standing Orders Committees can be surprisingly solicitous of those who wish to make criticisms of the majority of the NEC. Hence the delighted tweet.

For my part, what is most amusing about this episode is that the individual who is so excited at the opportunity to attack the NEC leadership at a National Self-Organised Group Conference was, in her time, party too far less measured and reasonable responses to criticism and dissent than that which has been exhibited by our current President.

When I was attacked by the Tory media for calling scabs “scabs” after the 2011 pension strike, as a Vice President she was part of the meeting convened by the then General Secretary to criticise me and warn me that the trade union could not defend me if I were attacked by the employer. She joined the collective criticism of me with a vigour and glee very different from the measured approach taken by UNISON's President in 2022.

Some 18 months later, when the media once more criticised me for publicly celebrating the death of Margaret Thatcher, the same individual was there when I was called to a meeting is at UNISON HQ with the intention of reprimanding me. I remember her saying that she was disappointed that this was the second time during her term on the Presidential Team that she had had such a conversation with me. Memorably, she went on to say; "I will say now, what I said then. This is the last time.”

Two and a half years further on, the same individual (this time in her continuing capacity as a trustee of UNISON) was one of the authors of an email circulated widely throughout UNISON intending to discredit me for having exposed wrongdoing in the Greater London Regional Office during the 2015 General Secretary election.

The email, to which she willingly put her name, suggested that the recording of a staff meeting at which the former Regional Secretary had wantonly broken the rules of the union was somehow inaccurate. The recording was not inaccurate (as UNISON would officially recognise soon thereafter) and the email attacking me was utterly unjustified.

This email would go on to be described by the Assistant Certification Officer as “quite an extraordinary email” and as “a classic example of an attempt by the victors to write the history (regardless of accuracy) and denigrate those whom they see as their vanquished adversaries.” Needless to say, I'm still waiting for an apology from any of the authors of the unjustified bullying email, including the individual who is this evening drinking to the success of emergency motion two tomorrow at National Disabled Members Conference.

Readers of this blog will, I am sure, understand my appreciating the irony of this individual supporting so enthusiastically a sham emergency motion calling for NEC members to be treated with “respect and dignity" in the light of her treatment of me when I was on the NEC. Our current President, a fine trade unionist, certainly treats NEC members (and, I am sure, UNISON members generally) with far greater "respect and dignity" than this former President ever did.

Update 31/10/22. The Conference did not reach the Emergency Motion. The faction-fighters issued a statement trying to resurrect year old arguments but failed to incite the division for which they hoped. It's all gone quiet on twitter...