Class struggle and the next Labour Government 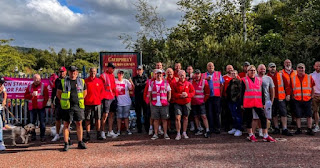 The Labour Party is enjoying a lead in the opinion polls which is unprecedented this century. Whilst strong supporters of the current leadership will see this as the product of what was, in their terms, a successful Party Conference, it seems more likely that the economic chaos created by the Truss government is at least as important.

Opinion polls have put Labour consistently ahead of the Tories this year. This is a significant improvement on this time last year when Johnson's Government were ahead of the opposition in the polls, and the latest poll gives us the largest lead we have had since the 1990s. However, we do not (yet) have a long-term consistent lead in the polls such as preceded previous occasions when we ousted a Tory government.

Last time Labour kicked the Tories out of government, winning a significant majority, our position in the polls had been even more impressive. From 1993 until the 1997 election Labour was ahead in the polls consistently over a period of four years.

A generation before, in the run-up to Harold Wilson's victory in 1964 the Tories had not been ahead in the polls for three years from mid 1961 until the period of the election campaign itself when they closed the gap considerably (so that Wilson achieved a tiny majority and had to call a further election in 1966)(credit to Mark Pack for this historical data).

As David Coates wrote in the run-up to 1997;”In electoral terms, it is striking how much assistance from external events and forces the Labour Party has always needed to create an electoral bloc sufficiently substantial to give it parliamentary power. It is also striking just how quickly that bloc has then eroded. After all, it took two world wars and a massive capitalist depression to wean sufficiently large numbers of UK workers away from an electoral loyalty to Liberalism and Conservatism, to give Labour its first (and still its largest) parliamentary majority in 1945. It then took another thirteen years of Conservative mismanagement and anachronistic fustiness to enable Harold Wilson fleetingly to reconstitute the width of that electoral bloc in 1966; and in neither instance did Labour manage to retain over the long term the majority it had so gratuitously won.

For in each case Labour was largely the passive recipient of electoral swings. Its own politics never normally possessed sufficient magnetic force to redraw the shape of electoral Britain by the power of its own programme and possibilities alone. The forces shaping that electoral map were largely external to Labour and beyond its control. They came (and the Labour Party flourished); they went (and the Labour Party was unable to prevent their going). It is true, of course, that the Labour Party did slowly build up its core vote by its own organizational and ideological efforts: defeating the Communist Party for the loyalty (by 1945) of the majority of unionized workers. But its capacity as a party to sweep up the bulk of the unorganized working class (in 1945) and of the new white collar and managerial strata in the private sector (in 1966), was largely not of its doing.”

Something similar was already happening when David Coates wrote those words. Following "Black Wednesday" in 1992, the Tory Party lost and did not regain its fabled reputation for "economic competence” (a trick which Liz Truss and Kwasi Kwarteng may just have repeated a generation later). John Major's Government then became mired in scandal and division.

Had he lived, John Smith would have led Labour to victory in the 1997 General Election, but as it was it fell to Tony Blair to benefit from the re-creation of the electoral bloc which had put Labour into Government in 1945 and 1966 (although with a lower share of the popular vote then either Clement Attlee or Harold Wilson had achieved).

“New” Labour subsequently benefited both from relatively favourable economic circumstances (prior to the crash of 2008) and from the parlous state of the Conservative party as it worked through its divisions over Europe that would eventually lead to Brexit. Although Labour lost votes in 2001 and, even more so, in 2005, the Tories were not able to overtake us.

These factors together meant that the government which was elected in 1997 lasted longer than its predecessors that had come into office in the 1940s and 1960s. However, the achievements of Labour in office between 1997 and 2010 did nothing to invalidate the cautionary observation made by David Coates in 1996; "We need to remember how regularly hopes have been created only to be dashed, promises made only to be broken, agendas set never to be sustained. We need to remember how previous generations of Labour politicians—both in opposition and in power—tended to fall short of even the most modest aims of the people sustaining them; and we need to contemplate at least the possibility that a Blair-led Labour government will disappoint its supporters in a similar way. Amid the understandable pleasure, for many on the Left, at the prospect of a Conservative electoral defeat at last, we need to keep a very tight grip on any creeping sense of euphoria.”

Given our recent experience of the brutal sabotage of the Corbyn leadership of our Party and the subsequent witch hunt of socialists under the current leadership (as recently exposed by Al Jazeera), many left wingers will find it  much easier to avoid a “creeping sense of euphoria" than we did in the mid 90s. Once again, the Labour Party can only approach Government having been sanitised and made fit to manage British capitalism.

I find myself increasingly reminded of an experience whilst out canvassing in the 97 general election campaign. One of the many right-wingers who were by then dominant in Lewisham's Labour Party asked me what I was doing campaigning when they knew I didn't support Tony Blair. I said that it was true that I did not support Tony Blair and that indeed I knew that if Tony Blair became Prime Minister the country would likely get worse. However, I pointed out that if John Major remained Prime Minister the country would get a lot worse a lot faster. I still think I was right on both counts. As they say, the worst day under a Labour Government is always better than the best day under a Tory Government.

Unfortunately, because Labour’s victories are always fundamentally Tory defeats, we have repeatedly ended up with Labour Governments which inherit problems from their Conservative predecessors (and confront the inevitable contradictions of a capitalist economy) for which they are eventually  themselves blamed, paving the way for a return to the UK’s political default setting, which is a Conservative Government.

Had we been able to create the mass Labour Party rooted in working-class communities, of which some of us caught a distant glimpse in the period after 2015, we might have been able to win on the basis of the sort of radical transformative policies which proved so popular in 2017. In the absence of such a vibrant extra-parliamentary power base, no Labour Government can do more than ameliorate the worst of inequality and oppression (and, indeed, we will be lucky if it does as much as that).

The campaigning and strike action which is happening up and down the country today in opposition to the current Tory government will need to continue up to and beyond the next General Election, regardless of the outcome of that election. Our standard of living, our employment rights and our public services are under attack. These attacks may reduce under a Starmer (or post-Starmer) government but we would be naive to imagine that they will cease.

Trade unionists and socialists (including, crucially, the many thousands of socialists inside the Labour Party) need to focus our attention upon defending our class, now and in the future, from the war being waged upon us by our adversaries. When the General Election comes, there will be sitting socialist MPs (if not many new socialist candidates) to campaign for, but before and after that there will be struggles which need to be supported.

We have been here before. We may very well be here again. As Tony Benn said; "There is no final victory, as there is no final defeat. There is just the same battle. To be fought, over and over again.”

Tory B Liar did not ameliorate Conservative policies, he extended and implemented them. Can anyone imagine Hohn Major succeeding in getting student fees through Parliament ? Or the privatisation of the NHS ?

What happened after 2010 demonstrates that, however bad a Labour Government may be, the Tories can always be worse...

Glad it was interesting...