Today has been a shocking day. Before most of us have had time even to read properly the report of the Equality and Human Rights Commission (EHRC) into antisemitism in the Labour Party, the Party has suspended our former Leader, Jeremy Corbyn, pending investigation into his reported response to the document.

CLPs have received guidance this morning urging us not respond to the report (for example on social media). This is clearly because the national Party is attempting to respond within (and, to a certain extent, to) a developing narrative that the report is “damning” and its publication “a day of shame” for the Party. At any event, I am writing here, not as an elected official of the Party, but in a purely personal capacity on my personal blog.

However, the guidance CLPs have received does not preclude motions being discussed within the Party, in a considered way, although it does argue that motions which seek to reject the conclusions of the report should be ruled out of order (because the NEC has accepted the conclusions in line with its powers and responsibilities under Rule). Therefore, Party members should indeed read the report for themselves and judge for themselves what the contents mean and how we should respond.

It is worth noting that, among other things, the report found as follows; “Our investigation found that the Labour Party breached the Equality Act 2010 by committing unlawful harassment through the acts of its agents in two of the complaints we investigated.” Whilst the report goes on to describe this as “the tip of the iceberg” it is also the case that, after many months of investigation, the number of such cases of unlawful harassment found were - two.

It would be inappropriate to suggest that this is the entirety of the criticism of the Party in the report of course. The report is also critical of political interference in the complaints process (by the Leader of the Opposition’s office (LOTO) “and others” which it found to be unlawful because this “created a lack of transparency and consistency in the complaints process and a serious risk of actual or perceived discriminatory treatment in particular complaints.” (Which is, of course, equally true, whether the interference is to try to get a case “dropped” or to urge swift action and a harsher sanction).

These are, taken together, serious criticisms which deserve to be taken seriously (and which the Party will have to take seriously as it is required to produce an action plan, in consultation with the EHRC, within six weeks). As a Labour Party member of more than forty years standing, I think it is important to try to have some sort of historical perspective though, particularly when a narrative is being pushed which seeks to assign “blame” to the previous Party Leader for circumstances which clearly go back long before his tenure.

My first experience of the Party’s formal internal processes was appearing – as a NALGO Branch official – as a witness for two of the Labour Councillors facing disciplinary action in Lambeth in the early 1990s. To have described the Party’s processes at the time as ramshackle would have been unduly kind, and it would appear that (perhaps with an exception in cases of sexual harassment) far too little has changed in the past thirty years.

The EHRC report makes some profound criticisms of how the Party has handled complaints relating to antisemitism in the recent past. It doesn’t – because that wasn’t its brief – tell us anything about whether such complaints would have been handled better in the more distant past (my experience leads me to suspect not). It also does not tell us anything about how well – or badly – the Party responds to other complaints of racism or of Islamophobia. Again, the report does not do that because that was not its brief or its terms of reference – but Party members seeking to respond constructively to the challenge of the report’s recommendations may well want to consider the issue of complaints of discrimination in the round.

One thing which has certainly changed in the – almost – thirty years since I was cross questioned by a hostile panel when offering character evidence for socialist comrades is the emergence of social media, which plays a central role in the current drama. The EHRC report notes that “social media was the source of most complaints of antisemitic behaviour: of the 70 complaints that we investigated, 59 concerned social media.”

There is no doubt that social media encourages the circulation of conspiracy theories (any of which can shade into antisemitism) as well as providing the opportunity for people to express opinions in haste and repent (or not) at leisure. If there is a lesson I would draw from today’s events it is that it is best not to express opinions too hastily, but I will break my own rule to say one thing.

Jeremy Corbyn is a fine socialist, a true comrade and an inspiration to millions. That was true yesterday, is true today and will be true tomorrow. I know that many thousands of socialists in the Labour Party will stand with Jeremy Corbyn today and tomorrow as we did yesterday.

As ever, John McDonnell hits the right note, calling upon Party members to keep calm whilst urging that Corbyn’s suspension is withdrawn. 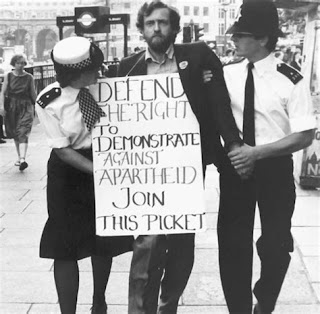 I have just finished reading the report and was struck by some of the misleading terminology such as 2 complaints being the "tip of the iceberg." There were only 2 such complaints, and although the 2 people were offensive in what they said, to tar us all as Party members as being anti-semetic (and that is how I feel) is dispiriting and frankly wrong. I think the Party has to accept that the complaints system was shambolic and much of the way in which complaints of anti-semitism were handled was incompetent and insensitive. I am also suprised that Corbyn allowed his Office when Leader to get as involved in how complaints were investigated. There should have been an independent process set up years before. This was recommended previously and ignored.
Corbyn's statement did not justify suspension but Starmer clearly wanted to deflect media attention and portray himself as decisive. All he has done is emphasis how divided we are in Labour and that does not help when we try to persuade the electorate we can and should be the next Government. Just ask Kinnock about that.