UNISON General Secretary election 2020 - who to vote for?

Unfortunately the offer made by the Socialist Party's candidate for UNISON General Secretary (which was welcomed on this blog) has not been taken up by the other candidates. It seems however that this offer was indeed made "for show" since Hugo Pierre is continuing his campaign in spite of his having made play of the need to reduce the number of challengers to the leading – continuity – candidate.

The Socialist Party will throw such resources as they have left at trying to maximise Hugo's vote, not because they believe that there is the slightest chance that he can win this election – but because the leadership of the Party need to demonstrate to its remaining membership that it still a force to be reckoned with in the trade unions. This will do some damage to the prospects of each of the other candidates advocating change, and probably particularly to the campaign of Paul Holmes, endorsed by the steering committee of UNISON Action Broad Left following a hustings meeting at which he and Hugo had both spoken.

Those of us who see the need for change in UNISON and have concluded that Christina McAnea is the continuity candidate in this election – based, in part, upon an assessment of what she is promising members in her manifesto – now have to decide which candidate to support. There are – regrettably - two serious candidates of the left in this election, Roger McKenzie and Paul Holmes. I have commented elsewhere about why this is. Given these circumstances, and given that the UNISON National Executive Council (NEC) has insisted that members must – again – vote on a "first past the post" basis even though they allowed themselves a preferential voting system for their own nomination – we individual members can only vote for one candidate and therefore have to choose.

Roger McKenzie buoyed by endorsements from – among others – Jeremy Corbyn and Diane Abbott, and having spent ten years travelling the country speaking with UNISON members, is standing on a platform of building an organising union (which clearly differentiates him from his fellow Assistant General Secretary). Having worked with Roger for a number of years on the UNISON NEC's Development and Organisation Committee (and having been as closely involved as anyone in the events surrounding the complaints about the last General Secretary election) I do not doubt Roger's credentials as a candidate of the left.

Paul Holmes has achieved a tally of nominations unprecedented for a rank and file candidate in any previous election (including over 100 branches, two Regions and the Union's largest Service Group) – this reflects his enjoying a greater breadth of support than any previous lay member challenger (as well as support from the MP with the strongest record of support for rank and file trade unionists over the years). Having served with Paul on the UNISON NEC for many years (and having supported him last time he was a candidate for General Secretary) I do not doubt Paul's credentials as a candidate for General Secretary. 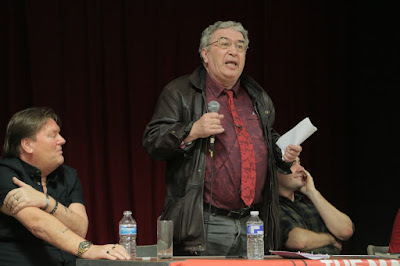 The decisive factor, though, is that Paul is standing as a candidate from – and committed to building – rank and file organisation within our Union. Alone among the candidates in this election, Paul Holmes both emerges from, and will (whatever the result) continue to promote the development of, the democratic organisation of UNISON activists independently of the Union machine – an objective to which this blogger has always been committed in principle (if sometimes my own practice may have been unhelpful) .

It's a shame that Roger and Hugo won't withdraw. I know they're the only candidates of colour making way for a white man to defeat the female candidate. However if it's not about money or ego that is what I'd like to see. Despite its large membership and strong activist base UNISON has been dead from the neck up for 20 years. Good luck Paul.