Last month this blog successfully exposed the misuse of UNISON resources to campaign for one of the candidates in the current General Secretary election (on behalf of the National Retired Members' Committee) – leading to a "news" post on the Union's national website being taken down (if a little late in the day, the horse having popped out and had a little frolic around the fields before the stable door was closed).

I am disappointed now to have to report on a further misuse of UNISON resources at national level (this time on behalf of the Community Service Group). On 23 September those responsible for maintaining the Facebook page for the Service Group posted a link to a post from a candidate's campaign – this is something which is explicitly prohibited in paragraph 51 of the General Secretary election procedures.

I will include – for posterity – a picture of the post since I very much hope it will be taken down promptly now that a complaint has been submitted. 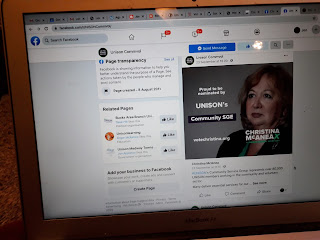 Let's be clear – this is not some mere triviality. This is an egregious breach of UNISON Rules, in support of a candidate in the General Secretary election, on behalf of one of UNISON's National Service Groups. It is also an indicator of the fact that some supporters of a candidate they now perceive to be the front runner may feel that the requirements of the election procedures are something for other people to observe.