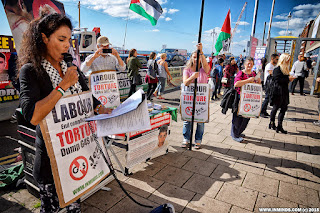 I can thoroughly recommend Al Jazeera’s "The Labour Files" the first episode of which is now available online.

Having lived through what happened in Brighton and Hove Labour Party over recent years, I can vouch for the honesty and integrity of many of the local witnesses interviewed as part of the documentary, which explores the war being fought against socialist within our Party. I also have well-founded and firm opinions about some of the liars and bullies exposed in the programme.

I shall watch the remaining two episodes (being screened tonight and on Monday evening) and may well have more to say thereafter. The first episode, however, has been more than enough to get me thinking about the problem of confronting a rampant reactionary bureaucracy in the mass party of the working-class, and about the similarities and differences with similar confrontations in the trade union movement (with which, as regular readers of this blog (Sid and Doris Blogger) will be well aware, I have a reasonable amount of experience).

Having a bureaucracy of paid employees which does the bidding of a right-wing leadership to constrain or eliminate left-wing critics is not a phenomenon exclusive to the Labour Party. I have written extensively on this Blog over the years about the struggle for democracy within the trade unions, both with reference to the history of the movement and to contemporary struggles within UNISON throughout my working life.

The resources available to a trade union bureaucracy (pro rata to the size of membership of the organisation) are greater than those available to the Labour Party (because the average trade union subscription is considerably higher than the cost of party membership). With those resources, I have witnessed what can be done to witchhunt socialist activists from the trade union.

However, the trade union bureaucracy, in spite of its relatively greater resources, is in a weaker position confronting its own rank-and-file than is the bureaucracy of the Labour Party. In UNISON the expulsion of a handful of activists caused great conflict and, on each occasion, the leadership eventually backed down. In today's Labour Party, hundreds - if not thousands - of members have had their membership terminated with remarkably little resistance.

The proximate explanation for this difference is the difference between the rules of the two organisations. In UNISON a member can only be disciplined in accordance with rules which protect the right to hearing and which provide that any sanction only takes effect once rights of appeal had been exhausted. In the Labour Party now, a member can find their membership terminated on the basis of an allegation which they receive in writing and to which they may only make a written response. Although they have a right of appeal, their membership remains terminated pending such an appeal - so a Labour Party member can be thrown out of the Party (regardless of the length of their membership or their record of commitment to the organisation) without any right to hearing or to challenge in person the evidence against them.

Of course, the difference between the rules of the two organisations simply reflects differences in the context within which they operate. In UNISON, the rules of the trade union can only be amended following a 2/3 majority vote at Conference on a proposal admitted to the agenda months in advance. Submissions to the conference by the National Executive Council (NEC) have no privileged position above those from branches or other UNISON bodies.

In the Labour Party, whilst proposals from Constituency Labour Parties (CLPs) to amend the rules must now (once more) be submitted a full year in advance, the National Executive Committee (NEC) can, and does, submit rule amendments with almost no notice (which can get through providing the trade union delegations have been squared).

Ironically, an important part of the explanation for the different structures of the trade union and the party is provided by the framework of anti-trade union legislation put in place since the 1980s.

The only legal recourse available to an individual member of the Labour Party  facing unjust treatment from the Party is to go to court, incurring considerable expense up front and risking an award of costs if they lose (to rub salt into the wound one of the things for which your party membership may be terminated without a hearing is if you fail to pay costs which a court orders you to pay to the Party!)

Whilst this difference in legal context is significant (and I myself have taken advantage of it in the past) a more important difference is provided by the underlying material reality of the two organisations in question.

The rank-and-file activists of a trade union are continuously in a three-way relationship with their own officials and with the employers with whom they bargain and negotiate. Their power in each of these relationships is founded upon the effectiveness of their organisation at workplace level (and therefore their most important relationship, which is with the workers they represent).

Strong workplace organisation constrains the ability of union officials to control local activists and can compel employers to a constructive relationship with local activists, even against union officials. My experience was always that my employer treated me as a local union activist with more respect than hostile officials of my own trade union and that, unable to secure support from the employer, the hostile officials backed off time and again.

Local Labour Party activists have no similar corresponding material power base to act as a counterweight to the power of the organisation. Perhaps we would have if our local Labour Parties were genuine mass organisations rooted in our local working-class communities, but they are not (and never have been). Therefore a bureaucracy which is less well resourced, and generally less experienced and less capable, than the bureaucracy of a trade union is nevertheless able to wield much greater power over the membership within the Labour Party.

The question which arises is, of course, the only question which ever really arises; "what is to be done?" Your humble blogger doesn't pretend for one minute to have a certain answer to this question. However, having considered the different balance of forces between rank-and-file democracy and bureaucratic autocracy between the industrial and political wings of our movement it seems to me that we need to find a way to build out from areas of relative strength to areas of relative weakness.

At the heart of Labourism, the distinctively British variant of social democracy, has been a "division of labour" between the political and industrial wings of the movement, as part of which the leadership of the trade unions have generally ensured that the role of the affiliated organisations within the Party has been to provide ballast for the leadership. We need to depart decisively from this tradition.

The trade unions need to become campaigners for democracy and the rights of members within the Labour Party. Trade union activists need to find ways to control our Labour Party intervention so that it is used to encourage democracy and not to prop up the leadership. A small first step, which I understand has already been taken by UNITE, would be to provide representation and assistance to union members who are being victimised or disciplined as members within the Labour Party.