Racism in the Labour Party 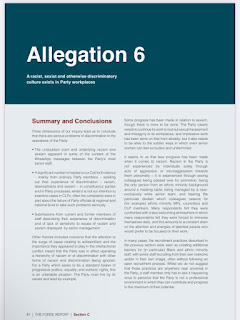 The Forde report may have been all but ignored by the hierarchy of our party (try searching the party website for the word Forde), but those of us who are committed to a Labour Party which represents the interests of the people the Party was established to serve need to be more attentive.

For those whose idea of politics is that it consists of what goes on in the Westminster bubble, including Party HQ on Southside and the office of the Leader of the Opposition, Forde was awaited for two years for what it would tell us about who said what to whom about disciplinary action within the party and to what extent officials hostile to the Corbyn leadership sabotaged our campaigning.

However, for those of us who understand that politics is about a class struggle, which is always being waged against us by our adversaries but only occasionally being fought vigourously from our side, the most important part of the Forde report is almost certainly its findings in respect of "allegation 6" (that “a racist, sexist and otherwise discriminatory culture exist in Party workplaces.”)

Forde States that; "three dimensions of our inquiry lead us to conclude that there are serious problems of discrimination in the operations of the party:

Though expressed in the measured, lawyerly language which helps to soften the blows of so much of what Forde has to say (and for which one ought not probably to criticise a measured lawyer) these are damning and damaging conclusions.

The Trappist silence of the Party Leader in response to this condemnation of the organisation he heads has rightly been called out by a number of our Black MPs. Hundreds of party members have signed an open letter calling for a response from the Party leadership to Forde’s conclusions in respect of Allegation 6.

At its best our Party has a proud record of fighting racism and supporting anti-discrimination legislation. At its worst, our Party has a shameful record of support for imperialism overseas and racist immigration legislation at home. We cannot go on facing in both directions forever if we expect to retain the strong electoral support which Labour receives from Black voters in the inner cities.

The silence of the Party leadership in response to Forde suggests an organisation in denial about its problems. This can't go on. Labour cannot be a Party in which Black activists are treated less favourably on grounds of race or are victimised for expressing their concerns.

In the meantime, those of us who become aware of individual cases which appear to illustrate in practice the conclusions drawn by the Forde report in respect of Allegations 6 will have to think carefully about how long we allow the Party to resolve issues before making public criticisms.