Dodgy goings-on in Westminster and on the Euston Road 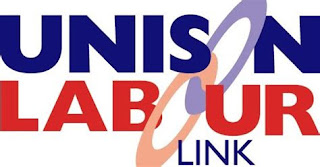 Boris Johnson has removed the whip from Tobias Ellwood because the latter missed yesterday's vote of confidence in the House of Commons. This is a pretty transparent attempt this to remove a vote from the camp of Penny Mordaunt in order to benefit the "continuity Johnson" candidate, Liz Truss.

Being a great believer in the old maxim that, "when thieves fall out, honest people smile", your blogger would not normally comment upon such nefarious goings on within the political party of our enemies.

Disqualifying someone from voting in order to try to rig the outcome of an election is very much the sort of thing one should expect from the Tory party. As our general secretary, Christine McAnea, said online yesterday the Tory leadership debates “have given all of us an unusual close-up of the Tories’ division, chaos and incompetence, and a front row view of their dying days in Westminster.”

Unfortunately, UNISON officialdom, working hand in glove with Labour Party officials have proven themselves not to be above similar shenanigans when it comes to retaining control of the UNISON Labour Link committee.

I observed following the results of last year's NEC elections; "With the best will in the world, a left-wing UNISON NEC, will need at least two years even to attempt to shift UNISON Labour Link leftwards.”

I underestimated the determination of the labour movement bureaucracy to ensure that UNISON's intervention in the labour party remains as tepid and ineffective as it has generally been for the past 30 years.

Almost as soon as the UNISON NEC had chosen their members of the National Labour Link Committee (NLLC), the Labour Party suddenly discovered that one of those chosen was associated with Socialist Appeal (a small and generally inoffensive group formed by those members of the former Militant Tendency who chose to remain in the Labour Party more than 30 years ago, and which was proscribed by the Labour Party NEC a year ago this week).

The NEC member was thrown out of the Labour Party and was therefore no longer eligible to sit on the NLLC. This helped to ensure that the influential position of Chair of the NLLC was won by a candidate whose victory was welcomed by the forces of continuity at the Great White Elephant of the Euston Road, contrary to what might have been expected following the results of the elections.

Subsequent to the election of further members of the NLLC, the Labour Party serendipitously found out that one of the newly elected members was associated with another group, which the NEC of the Labour Party proscribed in March of this year. Again, the individual, being excluded from the party, ceased to be eligible to sit on the committee to which they had just been elected, further reducing the voting strength of the left on that committee.

If I told you that we could be certain that there was collusion between officials of our trade union and the Labour Party to secure these timely expulsions (and therefore their subsequent consequences within UNISON), you might just think me an embittered old cynic prone to seeing the worst in people.

However, 14 years ago, the Labour Party expelled a UNISON activist (who was, at the time, an elected member of our NEC) just days before they were due to attend Labour Party Conference as a member of the UNISON conference delegation representing their Region. Amazingly (or not) the Regional Labour link Committee in question happened to have an urgent and unscheduled meeting in between the expulsion and the commencement of conference, at which they replaced their delegate.

I wasn't an embittered old cynic back in 2008, and I have seen these sort of goings-on far too often to mistake them for coincidences. The structure of UNISON Labour Link was carefully designed to try to insulate UNISON's Labour Party intervention from socialist influence, and our officials think nothing of conducting themselves in a way which would shame anyone other than Boris Johnson in order to ensure that this objective continues to be achieved.

Perhaps it is another coincidence that the attacks upon our immediate past President, my friend Paul Holmes (both within UNISON and from the Labour local authority which employed him), commenced shortly after he was elected to one of the directly elected seats on the NLLC three years ago, a position from which he had been excluded time and again when he had sought the nomination of the NEC.

UNISON Labour Link has long been one of the most embarrassingly ineffective parts of our trade union. It now probably deserves the distinction of also being the primary locus of underhand manoeuvres and political witch hunting in UNISON.

Critics of UNISON's left-led NEC have made great play of foolish and irrelevant comparisons with our soon-to-be former Prime Minister. However, it is not the majority of the NEC who are engaged in such underhand manoeuvres. Rather it is many of their opponents who are wanting in integrity and genuine commitment to the interests of the members of our trade union.