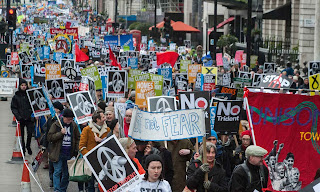 It is good to see that Labour CND are launching a campaign to try to influence our Party leadership in the direction of opposition to Tory plans to increase expenditure on “defence” (which actually means expenditure on ever more advanced means of killing people).

The United Kingdom has, for decades, spent more than we can afford on our military as our ruling elite clings on to what can only be considered “Walter Mitty Great Power Status”, looking backwards to an era in which Britannia ruled the waves and London was the centre of an Empire on which the sun never set.

Other European nations, which have managed to shed (or never had) illusions of past imperial glory have been able to free themselves from the economic burden of sending troops around the world to prop up autocracies or to cling on to windswept remnants of former global power.

Our Party, at its best, has been a Party for peace and international cooperation, but our leaders have often fallen in line behind the drumbeat of false “patriotism” for fear of being accused of being “unpatriotic” by people who will always level that accusation at us no matter what we do or say.

Labour Party members and trade unionists need to campaign for reductions in expenditure on the military and for resources to be shifted to socially useful purposes, such as dealing with the climate emergency.

Boris Johnson may be content to wave a moth-eaten Union Jack and purchase military hardware whilst our health service - and our international development budget - suffer. Labour should not fall into the trap of pandering to his delusions.

Labour CND have a model motion for Labour Party branches and Constituency Labour Parties (CLPs) which can be downloaded from their website.